Last year my friend went to Market in the W Hotel just after it’s opening and said it was a must, so it’s been on my “To-Eat” list ever since. The W itself is quite modern and chic, located on Stuart Street in the Back Bay, and Market wasn’t any different. The dining room on Thursday evening was packed and lively, as was the bar located in the back of the room. While we were not seated in a booth, I have to make note of the fold down arm rests; I’ve never seen that before and I was thoroughly impressed/excited!

Bread: Sour dough, yum! Served in slices with a small round of softened butter. They refilled our basket automatically, which is a plus b/c 90% of the time people want more bread. 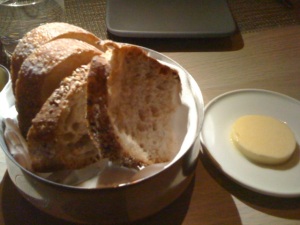 Menu: Divided into 7 sections featuring: Simply Raw, Pizza, Appetizers, Fish, Meat, Simply Cooked, and Sides. I was a bit torn b/c they had entrees under the Fish and Meat sections complete with sauce & sides, and then similar Simply Cooked items that were served a la carte and required you to choose a Side. After much deliberation among the soup, salad and entrée choices, I finally made a decision.

Presentation/Taste:
Cheese Fritters: The boys ordered these for the table so of course I had to try a bite. Basically just fancy mozzarella sticks in ball form. They were warm, gooey, and quite cheesy! 😉
Butternut Squash Soup: My bowl was set in front of me containing small chunks of butternut squash and then a server poured the soup at the table. I ordered it sans mushrooms (b/c chucks of shrooms scare me) and I’m sure it was just as delicious! I love soup, chunky or not, and this is definitely a fall favorite.
Yellowfin Tuna Steak: I ordered this “simply cooked” which meant it was only accompanied by lemon and some peppers. The steak was definitely smaller than I was expecting, but it was cooked just as I asked, seared on the outside and rare on the inside.

Bathroom: Really pretty counter tops and blue tiled accents around the mirrors, which unfortunately were ‘fat mirrors’ (girls, you know what I’m talking about – at least the full length was forgiving). Multiple stalls with dark wooden doors. 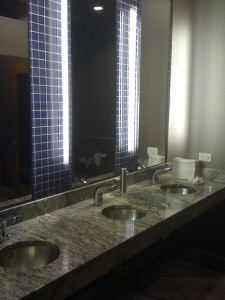 Wait Staff: Our waitress was fantastic as she was able to deal with our crazy & loud crowd (and throw in a few 1-liners herself)! Even when we had a major issue with the bill which ended up being our fault, she was understanding (upon receiving the check we noticed that the 2 bottles of wine we ordered at $25 a pop were in fact double that price – turns out we were looking at the ½ bottle page…).

Overall: The portions are small. The prices are on the high side. And it doesn’t help that most items require you to order a side or an app to go with it in order to make a full meal. I have no complaints about the taste, but the size of the meals were disappointing; my poor friend Jess ordered the Beet Salad (consisting of 2 endives and tiny cubes of beets) and the Black Truffle Pizza which looked like an app. Dessert however was fantastic: a caramel sundae with whipped cream, chocolate sauce, & caramel popcorn! And cheesecake topped with sobert.

The Perfect Bite: Butternut Squash Soup. The chunky pieces of squash really made this a winner. 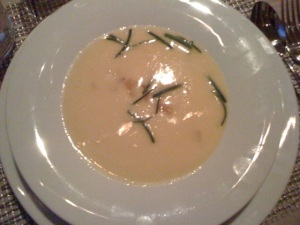