The first time I heard of this new restaurant in the Fairmont Battery Wharf was at their booth at the Taste of the Naton food event. I don’t remember what it was that I tasted from Aragosta, but it was certainly delicious enough to register as a “must-try”. And so goes Restaurant Week stop #2…

Bread: On a small slab of wood came 4 small pieces of bread with a tiny bowl of EVOO and olives. The bread was great, and I guess smaller bread portions are better so you don’t spoil dinner, but I always appreciate a good hearty piece. Luckily they brought another bread board soon after we finished the first. 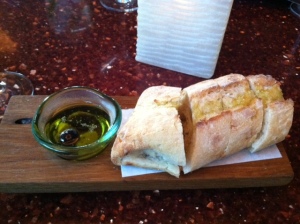 Menu: The online Restaurant Week menu differed slightly from the menu we saw but not enough to throw me off my game. The courses were taken directly from their regular menu which consisted of First Courses, dishes To Share, Pasta, and Secondi. After looking at the actual prices of the entrees we ended up ordering, there’s no doubt we got a good deal! I just wish they represented their namesake on the RW menu with a lobster dish… oh well.

Food/Presentation:
Chilled Tomato Soup, Truffle Grilled Cheese Sandwich
Probably my favorite food combination of all time. The 2 sticks of grilled cheese was the best part, filled with some kind of soft cheese (maybe goat?) rather than a melt-y cheese which I was expecting. The tomato soup itself was disappointing. I understand it’s summer and that was probably their reasoning for serving cold tomato soup – and that’s ok with me if it’s gazpacho – but this was liquidly and lacked flavor. Ok for dipping the delicious sandwich in though. 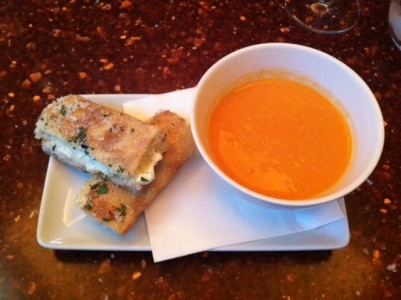 Baked Mezzi Rigatoni, Veal Meatballs, Nonna’s Gravy, Pecorino Toscano
This short pasta was served in a cast iron bowl topped with pecorino and mozzarella. I’m impressed with the use of “gravy” and not sauce – I usually get harassed for referring to marinara as gravy. I don’t know that I’ve ever had veal meatballs but they were excellent, perfect texture and toughness.

Gelato & Sorbetto, Almond Biscotti
When I asked about the flavors I was told they were vanilla (which is a waste of my time & calories), stracciatella (chocolate chip flavor, not bad), and coffee (which I was most excited for), but when dessert was delivered I noticed it was lacking the flavor I was actually looking forward to! Not sure what happened there but I was slightly disappointed with this last course. I’ve have way better biscottis in my time and these are probably the 2 most boring flavors I can think of. Bummer. 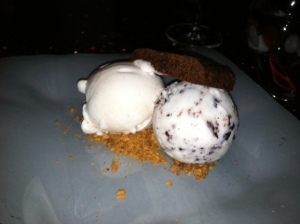 Bathroom: Might be the coolest bathroom ever. When I first walked in I was slightly confused by the lighting and the mirrors; wasn’t sure which way to turn! The center of the restroom holds a circular, double-sided sink area with stalls encompassing the right side. Make your way to the back left and there is a row of about 10 more stalls with decorative mirrors as doors. The aspect I found most intriguing were these 4 “solo sinks” placed in the walls around the center of the room. Not sure I can do it justice with my description, but it was pretty awesome. (I must note that these restrooms where part of the hotel and not exclusive to Aragosta itself). 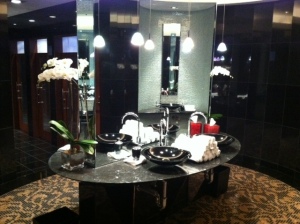 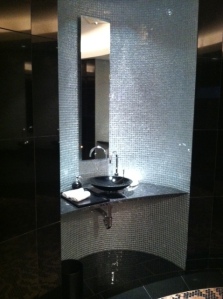 Service: We started with one waiter who took our drink order but then another gentleman (perhaps a manager of some kind) took care of us the rest of the evening. He was able to adjust 2 courses to fit Sophie’s Kosher/veggie needs which was nice. I was getting a little antsy waiting for our starters but the rest of the courses came out within a reasonable time. 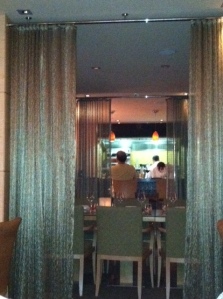 Overall: I really love the space, details, and atmosphere of Aragosta. It’s a comfortable setting with just the right amount of trend. Open kitchens are popular but I really loved the “private rooms” in the middle of the dining room that were sectioned off by thin curtains. The dark red dining table and color-speckled water glasses really caught my eye. Unfortunately I was underwhelmed by the food. My entrée was the best part, but perhaps I ordered the wrong dessert (the Strawberries with Zabaione Gelato sounded delicious). I would definitely try it again as the regular menu looked pretty impressive (I see you bolognese…). 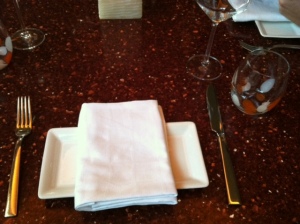