Bread: Three varieties of bread came with a small side of butter. The flat cracker sesame bread and potato-like bread didn’t need any butter as they had their own unique flavor, but I did spread a little on the slice of plain white.

Menu: The structure of the menu is simple, offering Appetizers and Entrees. There’s also a note at the bottom of the page about the Chef’s Tasting Menu, but I didn’t inquire as I had a hard enough time with the options in front of me. The prices are definitely steeper than I’m used to but I knew this going into dinner, as Chef Ming Tsai is one of the best in MA, is nationally known, and has appeared on The Food Network numerous times. This is the kind of meal you don’t mind paying $40+ for because you know you won’t be disappointed, and it will probably be one of  the best versions of whatever it is you’re ordering. That being said, I was torn between 3 dishes and opted for one of the signature dishes which has been on the menu for over 10 years.

Food/Presentation:
Tempura Sole-Avocado Roulade with Black Garlic Aioli and Ponzu Vegetables
I wasn’t sure what to expect with this appetizer, but our server did a great job of describing how it was prepared. Three sushi roll-like pieces topped the vegetables and were surrounded by small dollops of black garlic aioli. The typical “rice” section of this roll was actually the sole which encompassed the avocado and carrots. The outside may have been deep fried but it didn’t make the dish heavy or greasy. Definitely a great way to start the meal! 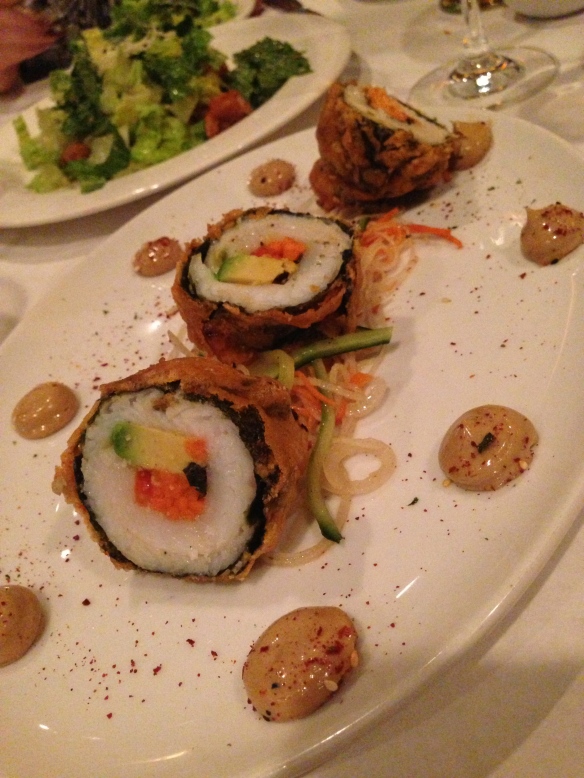 Garlic-Black Pepper Lobster with Lemongrass Fried Rice: Pea Tendril Salad with Tamari-Ginger Vinaigrette
For my entree I was deciding between this and the other signature dish which a friend recommended, the Sake-Miso Marinated Sablefish (a.k.a. Butterfish). I think either choice would have been a good one, but I’m really glad I chose the lobster. The shell of the body was stuffed with spinach and rice, and the plate was covered with big pieces of lobster tail, more rice, a few mushrooms, tomatoes, and incredible flavor! A fantastic lobster dish without the typical mess and work that comes with de-shelling. 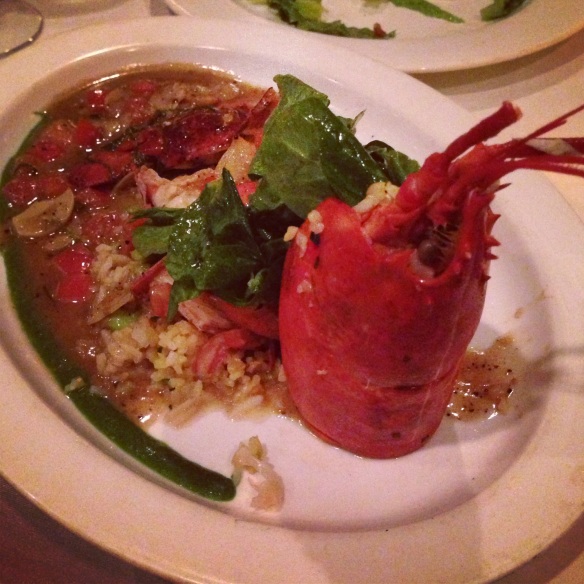 Peanut Butter Creameuax: chocolate sorbet, pomegranate jelly, black sesame cocoa shortbread
The dessert menu looked to good to pass up, so my cousin & I split this take on PB&J (one of my favorite combinations). The chocolate sorbet had a strong flavor, the jelly was amazing, and the peanut butter component had a smooth mousse consistency. Great way to end the meal!

Restroom: The women’s room has 2 private stalls with wooden shutter doors (my favorite), a nice granite countertop, and warm and comfortable hues. I wouldn’t mind basing my home bathroom off of this design!

Service: Our server was well informed and shared with us the signature and popular dishes as we had never been to Blue Ginger before. When deciding on appetizers he made a helpful suggestion; we were thinking of ordering the Tempura Sole-Avocado Roulade and the Shiitake-Leek Springrolls but he pointed out that they were somewhat of a similar appetizer, so we went with the Caesar instead. We were taking our time with the first course and he was great about not rushing us. When our entrees were ready and we still had some salad left on the plate he asked if we wanted to delay the second course until we were done with the first. We said it was fine to bring the entrees over, but it was nice of him to ask and make sure we were ready!

Overall: Blue Ginger is Ming Tsai’s first restaurant, opening in 1998 and serving East meets West cuisine. A recent 2008 renovation added private dining rooms as well as a modern lounge featuring an Asian style tapas menu. The casual and chic dining room is set up with free standing tables and banquettes. Based on the high prices I thought the dining area would be a bit stuffy but I was happy to see it was more of a comfortable atmosphere. The service was great and the food was really excellent, just be prepared to spend! Appetizers run from $10-$17 and entrees range from $22 for a tofu dish to $41 for lobster or the signature sabelfish, most plates being $30+. Blue Ginger has an impressive beer, wine, and cocktail menu as well. I went with the Polly-Tini: Ketel One, lychee puree, and pink grapefruit. The menu of course has Asian influences but offers standard items like scallops, halibut, beef, lamb etc. I highly recommend whether you’re in the Wellesley area or not, Blue Ginger is a must try.

The Perfect Bite: Lobster, fried rice, and all the goodies!