When meeting my family 1/2 way between Worcester and Boston for dinner we usually find ourselves at Papa Razzi or more recently The Met. I can only repeat a restaurant so many times (unless it’s one of my favs) and tonight was a special occassion – my birthday dinner – so I needed to find something different. I heard about a new opening on rt 9 in Framingham, Top Shelf, and decided it was worth a try!

Bread: More than enough rolls were served on a dish with rosemary & crushed red pepper EVOO for dipping. The bread was unreal – each roll was warm, flaky on the outside and light & fluffy on the inside. 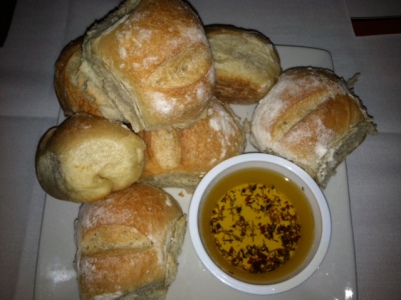 Menu: Soups, Beginnings, Salads, Little Italy, From the Coals, From the Nets. All entrees (excluding the pasta dishes) came with a choice of 2 sides (choice of 6 including veggies & carbs). I was a little disappointed that the Seasonal Soup offering was Tomato Florentine – I was clearly hoping for some kind of butternut squash. But I was probably better off since I already had my heart set on a specific app.

Food/Presentation:
Lobster Quesadillas: house pico de gallo and guacamole
I wasn’t leaving Top Shelf without trying these, and I’m glad we did! Usually served as 4 quesadillas, the waitress had the chef cut each of them in half to accommodate our part of 6 so everyone could have a taste. Each bite had plenty of the lobster and their pico and smooth guac weren’t bad additions. 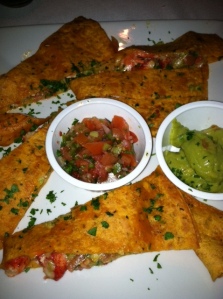 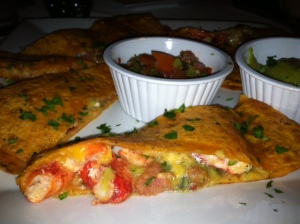 look at that lobster!

Lollipop Lamb Chops served with rosemary mint sauce
Three lamb chops were served between broccoli and a pile of sweet potato fries. I was looking forward to the fries the most and unfortunately they were a soggy disappointment – no crunch or crisp at all! The lamb itself was good though and you can’t really mess up steamed broccoli. 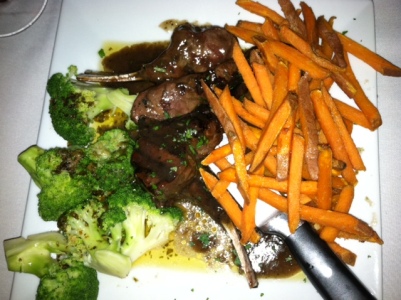 Chocolate Mousse Cake served with chocolate ganache
Divine! This was excellent, especially with a spoonful of the ganache, raspberry sauce and homemade whipped cream. Thank goodness I had others to share it with… 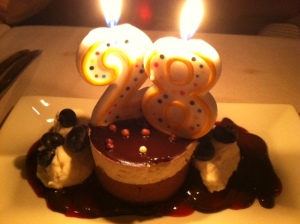 Bathroom: The restroom was pretty plain, with half painted half tiled walls. There’s plenty of empty wall space to add some pictures or photographs to give it some character…. I’ll chalk it up to”It’s a new estbalishment, give ’em some time.” 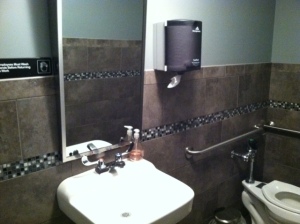 Service: We didn’t interact too much with the waitress but each course was served on time and she was able to answer a few questions we had about the menu.

Overall: If you’re not looking for Top Shelf, chances are you won’t find it. The store front itself is modest and barely looks like a restaurant. I was surprised they actually had an L shaped bar in addition to the 10 or so 4-top tables. I like that they had espresso as well as tea & coffee, and the cappuccino was actually good (except who only has 1 type of milk?). If you hate dealing with city parking and prices, I would recommend you try Top Shelf. Only 2 entrees are listed at $24 and most run $18-$20, while the salads and apps are all $10 and under. 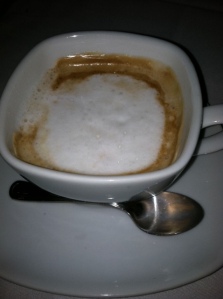 The Perfect Bite: The bread was really addicting but every bit of that mousse cake was unbelievable: mousse, whipped cream, raspberry sauce, blueberry to top it off!