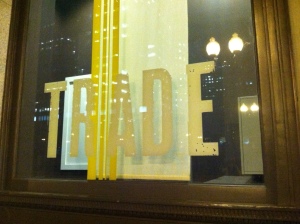 I’m a big fan of Jody Adams’ Rialto located in Harvard Square. I’ve been twice and each time have had unforgettable meals. When I heard about the beginning stages of Trade I could not contain my excitment, espcially because this concept would be more casual and affordable than the sophisticated and elegant Rialto. It took a few months since Trade’s debut, but I finally made my way to the Waterfront…

Bread: We were not served bread. Which I found strange and disappointing.

Menu: Small (tapas plates), Soups & Salads, Flatbreads, Plates (entrees), A Little Extra (sides). The smaller shareable plates offer a far share of seafood, the 4 flatbreads all sounded appetizing, and the entrées feature at least one pasta, fish, chicken, burger, and steak. I saw a variety of options from each section so my friend and I decided to share the following…

Food/Presentation:
Local Burrata with almonds, dates and balsamic
Two large pieces of burrata were served next to 3 long crostini and topped with chopped almonds. Date spread was smeared on the plate for dipping. I enjoyed the textures and flavors of this Small Plate; the cheese was soft and creamy on the inside as burrata should be, the bread was crunchy & drizzled with oil, and the dates added a subtle sweet component. 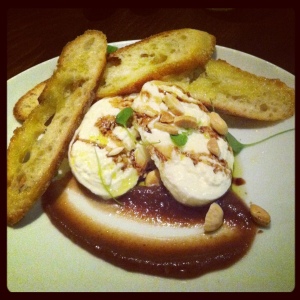 Tomato and Roasted Fennel Soup with curried yogurt, honey and Asiago
The soup was drizzled with honey & yogurt (and some unfamiliar leaves); an Asiago cheese stick was placed across the bowl for dipping. I’m usually a fan of anything with tomatoes (especially soup) and this dish was no different. I missed the fennel flavor but enjoyed the slight curry taste.

Lamb Sausage Flatbread with eggplant, Manchego, peppers and garlic yogurt
An oblong thin crust flatbread was served on a wooden board, topped with eggplant spread, roasted peppers, shaved Manchego, mint leaves, and garlic yogurt drizzle. I failed to mention the lamb sausage for a reason as it was more of ground lamb and somewhat sparse throughout the pizza. While this was tasty I was underwhelmed and disappointed in the small amounts of lamb. I expect a lot from Chef Adams, and she never fails to impress me! I was just hoping for more with this flatbread. 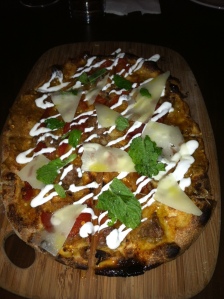 Taza Chocolate Budino with sea salt, rosemary and hazelnut wafer
A small ramekin came filled with chocolate “pudding” and topped with sea salt and a single rosemary leaf. The hazelnut wafer was a great contrast to the sweet chocolate and strong salt presence. The pudding was dense, thick, filling, and delicious.

Bathroom: One of my favorite bathrooms in the city, mainly because of the three private stalls! I love the raised square sinks and the bright blue stall doors against the mainly all white restroom. 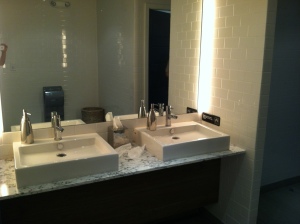 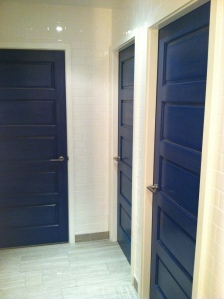 Service: Our waitress seemed uninterested at first, almost annoyed. We were undecided on drinks and dinner so we asked a few questions about cocktail ingredients and food portion sizes. While she was able to answer the questions, we were somehow more confused after hearing her answers. The burrata and soup came out together and before we were finished the flatbread was brought to the table. Since we were sharing everything it wasn’t a big deal, I was just expecting to have the flatbread after the 1st course. While our server seemed hurried at times, we never felt rushed. Overall an ok service experience. 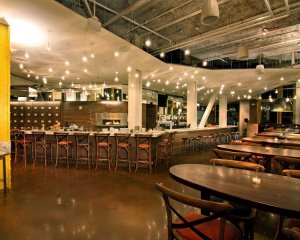 Overall: My first impression of Trade is a great one: I enjoy the open bar/lounge area fit with free standing high tops & banquettes and plenty of standing/mingling space. The dangling bulb lighting gives the illusion of a starry night, while larger domed lighting fixtures decorate the dining room. Exposed ceiling piping gives it an industrial feel, and the wooden tables & chairs with accent primary colors add a modern tone. I enjoyed the food and wouldn’t hesitate to go back and try another flatbread and any one of the entrees. My work at Trade is not complete; there’s more food to try and more cocktails to taste! 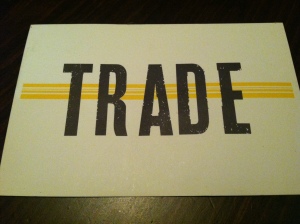